Summary
Nazroth’s Stronghold is a custom map for Quake I made in one week half-time using TrenchBroom, an open source level editor for the Quake engine.
The map is short but fast paced with different encounters, weapons, secrets and a touch of semi-linear level design.
It was designed expecting the player to already be familiar with the core mechanics.
Specification
· Developed at The Game Assembly
· Quake Single Player Custom Map
· Development Duration: 1 week (half-time) + 1 day of polish

Watch the video above for a developer walkthrough.

Design Process & Walkthrough
Because of the short development time, I started right away with blocking out the level in TrenchBroom, an open source level editor for Quake. My inspiration for the level came from E1M5: Gloom Keep. Gloom Keep has two entrances to the main level and I’m a big fan of semi-linear level design so I made two entrances as well. Giving the player more choices is always fun. 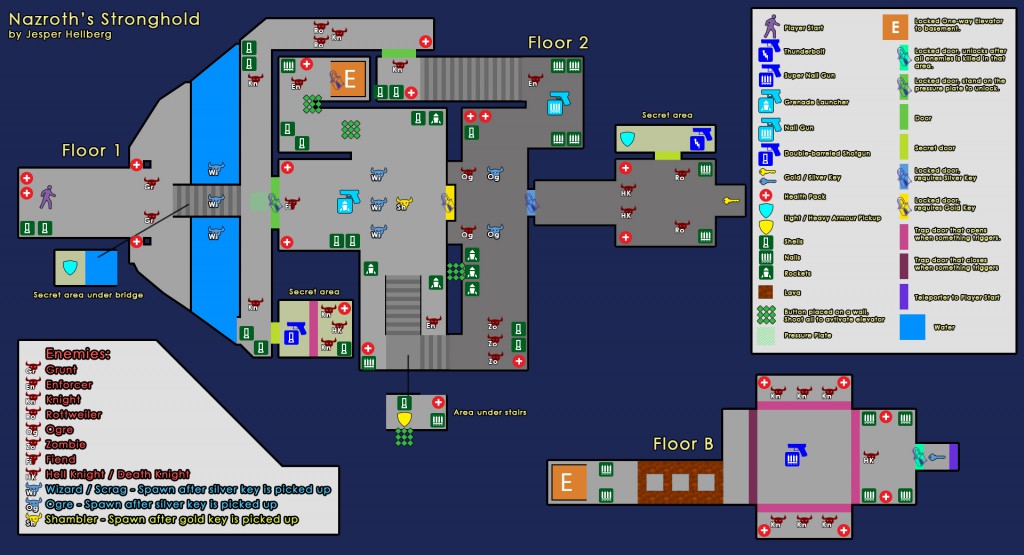 Top Down Layout for Nazroth’s Stronghold 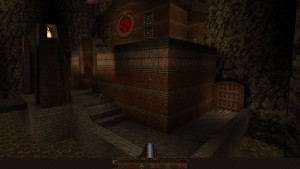 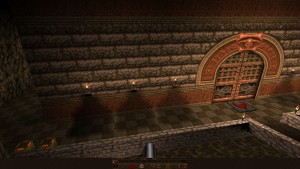 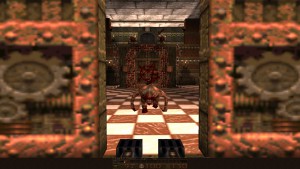 In good old Quake fashion, hostiles are lurking behind every corner.

The most straightforward way into the building is by stepping onto the pressure plate which opens the main gate. When the doors open, a fiend will immediately jump at the player. The player will then see a big door that requires the gold key to open and two ogres on the second floor. Behind the ogres lies a door the requires the silver key to open.

If the player takes the other path to the left, she will eventually come up to the second floor behind the ogres. 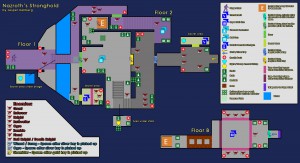 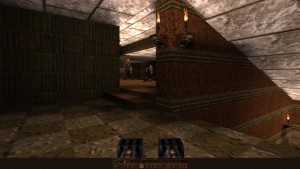 To proceed further into the map, the player needs to find the elevator and activate it by shooting four buttons. Once all buttons have been activated, the player can take the elevator to the basement floor. 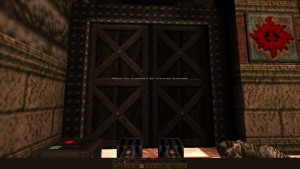 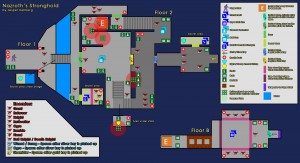 In the basement the player will have to make some platforming across the lava. On the other side, a devious trap awaits when the player picks up the SuperNailGun. After the player has killed all the enemies she can proceed to pick up the silver key and walk into a teleporter. The teleporter will transfer the player back to the beginning of the map with new spawned enemies. 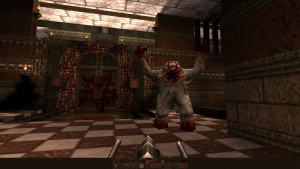 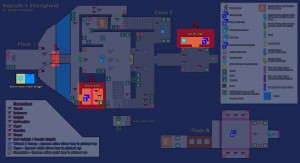 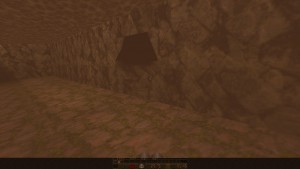 1. The first secret is a set of armour, hidden under the bridge. 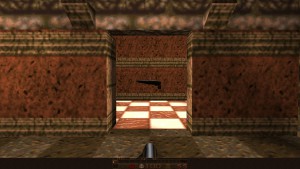 2. Hidden door on the right side of the building near the beginning. Shoot to open. It can be opened by shooting at it. The door itself is a tiny bit thinner the the main wall. Inside lies a trap and a double-barreled shotgun. 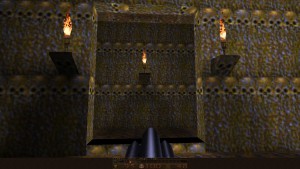 3. Last secret can be found between two candleholders with skulls inside the room with the gold key. Inside lies the Thunderbolt that helps the player defeat the Shambler much easier.

Final Thoughts
I wanted to implement as much gameplay as possible in the limited time I had during development. That’s why I chose to reuse a lot of the environment but giving the player a new kind of challenge each time she revisits the main hall. The outcome is a steady pace with lots of action and variety. But it also resulted in the locations for the locked doors being more of an afterthought. That’s why they are placed like the classic “introducing the first obstacle, then the second after” scenario.

Some of the iterations I made was for the torch holders on the wall near the main gate. They were not placed high enough, which lead to the player getting stuck each time she ran near a wall. So I made sure every torch was placed high enough through the whole map. 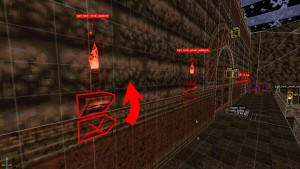 What I would like to improve in current version
· Map not optimized enough to be playable in regular software rendering mode. However, it does work in OpenGL but optimization should always be a priority.

· Give the area behind the locked silver door a greater purpose by adding more rooms, rather than just having one room holding the gold key.

· Make the environment keep the same standard as the original Quake maps.

· Make it more obvious for the player that the buttons activates the elevator.

All in all, I am still happy with what I managed to implement in just one week half-time of development.